The Silence Between Us, by Alison Gervais 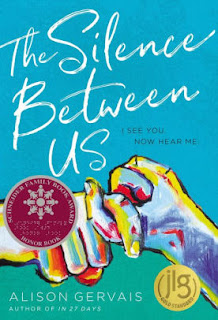 Moving to Colorado poses challenges for Maya and her little brother.  Maya has been deaf since a case of meningitis a few years ago, but she's felt protected by being in a school for the deaf.  With the move to Colorado, she's forced to attend regular school, using an interpreter in her classes.  It's hard work lip reading and following her interpreter's signing, and it's painful to be an object of stares and gossip from her peers.  But what gets at Maya the most is the judgment that she senses that the hearing folks have about her condition.  They seem only capable of pity and she sees that they assume that she is miserable being deaf.  But nothing could be further from the truth:  she likes being who she is.

Her year presents other challenges:  her little brother is sick, she faces discrimination from peers/teachers/employers, and fights pressure from various sources that want her to get a cochineal implant so she won't have to "endure" being deaf.  Meanwhile, she surprises herself by falling in love with Beau.  Beau is a bright and intelligent boy who teaches himself sign language so he can talk with her and has plans to go to Yale, but has dreams of his own that he doesn't dare reveal.

It's a very busy little story, full of ideas, but Gervais really struggles to tie them together and resolve them.  The strength of the book is its glimpse inside of the character of a deaf teenager.  Gervais works hard to show what communicating with a mix of lip reading, signing, and speech is like.  The novel also touches on a variety of important issues for deaf people ranging from the history of disability rights to discrimination, and pays special attention to the debate over children getting implants.  But as a story, nothing really comes together and I felt very little emotional connection with the characters or sensed much of one between them.  Gervais has an episodic format, focusing on her challenges, but that doesn't give us much room to develop a character and doesn't create an organic flow.  A major casualty is the underdeveloped romance with Beau.  Subplots (like Beau's conflict with his father or Maya's brother's health issues) are just left to lay there.