Three Things I Know Are True, by Betty Culley 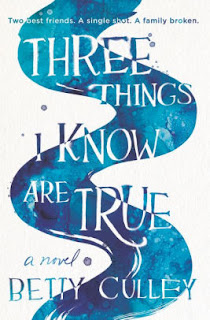 Clay and Liv always enjoyed playing Three Things down by the river.  The rules are simple:  one person provides the subject and other has to respond with three facts about that subject.  The only restriction is that all three of those things have to be true.

Truth used to be easy, but it's grown considerably harder since Liv's brother Jonah was injured while Jonah and Clay were fooling around with a gun that belonged to Clay's father.  Now Jonah lies comatose, hooked up to numerous machines (his new "friends" thinks Liv and she gives them all names) and tended by home nurses around the clock.  While it was Jonah who basically shot himself, the gun was left out unattended and Liv's mother is thus suing Clay's father for Jonah's care.  For Liv who misses having Clay around and for Clay who misses his best friend, it is hard to know where loyalties should lay.  Culley's verse novel explores these ambiguities and how one moves on from such a tragedy.

Novels in verse, as I always warn, can be very good, but they are frequently bad.  This one does not stand out.  The poetry is rarely interesting in and of itself, neither in structure nor in content.  Culley simply doesn't have much to say about the tragic set-up that she's created.  There's some attempts at speaking about the river that flows by their home.  The Three Things game comes up as a repeating motif.  But no great drama comes brings the story to a climax and in the end the characters peter out in their own ways, none of them learning much in the process.  The verse in the end mostly serves as a way to take a fairly thin story and stretch it out into over 400 pages.