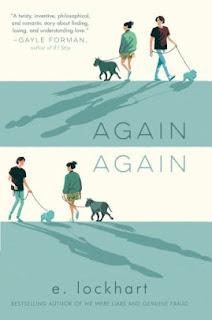 Adelaide is spending the summer walking dogs and trying to finish a set design project to fulfill an incomplete.  Otherwise, she stands to fail out of Alabaster, the private school which she attends.  When she transferred in she found the work much harder than at her old school, but the real reason she failed most of her classes was that she didn't do any of the work, choosing instead to spend her time with Mikey Double L, her boyfriend (who has now -- at the start of the summer -- dumped her).  But it quickly becomes apparent that there are deeper issues at play than teen romance.

Adelaide's brother Toby is an addict, stealing from his family and hurting them.  His failed stints in rehab have largely bankrupted them and is the reason that Adelaide changed schools.  Adelaide, unable to admit that Toby's struggle affects her, hides away in a world of what ifs, which is what the novel becomes.

What if you could play out every action and choose amongst them based on the different outcomes?  In a way, that is what this novel does by taking us through a "multiverse" where periodically the narrative splits into two or three parallel stories.  We walk through a scene of a page or two and then back up and do the scene all over again with a different outcome, and then once more.  Each time, Lockhart then picks one of them and moves forward.  The gimmick, combined with a less intuitive habit of switching into verse at random moments, makes for a tricky read.  It's an interesting writer's exercise (creating a scene and then rewriting it with a different outcome) and the sort of thing that writers do in their work.  The difference is that writers usually pick one and throw out the others.  The intention of including the different variants in the novel is supposed to give us more insight in the characters.  It does this, but it forces you to stop and re-read passages and compare variants, disrupting the pace of the story.

As with her more recent novels, I found the characters uninteresting, elitist, distant, and painfully self-absorbed.  There's only superficial interaction between characters and no interest in exploring the world around them. Other readers compare this book with her more recent novels We Were Liars and The Disreputable History of Frankie-Banks (both of which I despised for pretty much the same reason of having unbearable characters) but the closest relative of this book is really Mister Posterior and the Genius Child, written under Lockhart's real name (Emily Jenkins) in 2002 and as suspiciously autobiographical as this one is.  Both are written in the same stilted passive narration and both describe a privileged community, seemingly in a vacuum from popular culture or modern technology.