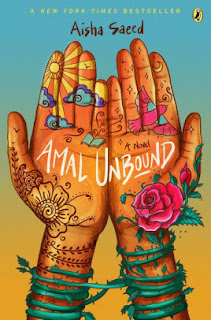 Twelve year-old Amal has big dreams for a schoolgirl in rural Pakistan:  she wants to become a school teacher.  But fate seems to have other plans.  First, as the eldest daughter, she has to spend considerable time at home helping out.  And while her mother is recovering from a difficult childbirth, she is unable to attend school at all.

Then a much bigger tragedy strikes.  For the crime of talking back to the local landlord and refusing to let him have her pomegranate, she is taken from her family and forced to become then man's indentured servant, effectively ending any of Amal's dreams.  But as desperate as Amal's situation seems, she is determined to fight back.

A simply-written but powerful story of one girl's fight for freedom and respect is both full of joyous local color and insightful in explaining how injustices like the one described can occur.  As middle grade reading is concerned, this one packs considerable punch.  The plain writing in no way takes away from its powerful message which simultaneously attacks misogyny, economic injustice, and slavery.