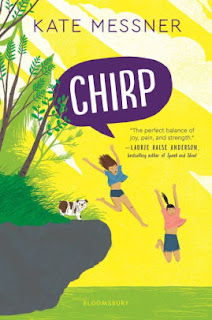 Mia is spending the summer helping her grandmother manage a new venture growing crickets as a food source.  It's an uphill battle trying to convince people to try them, but they taste delicious and folks eventually warm to them.  Plus Mia is creative and motivated to help her grandmother's success, enlisting her friends and some fellow campers at a summer program she's in for young entrepreneurs.

However, things keep going wrong with the equipment and with pests.  So many things, in fact, that Mia grows suspicious that someone is actively sabotaging the business.  Can Mia and her friends figure out who is causing the damage and stop them before its too late?

That would have been a straightforward story and made this middle grade reader less of an attention grabber, but Messner has a second storyline:  Mia used to be an aspiring gymnast, but then she got injured and now she just doesn't feel like doing it.  At least that is what she tells others.  In truth, she's lost her confidence and become afraid.  Something happened to her and she isn't really sure to whom she can turn to express her fears.

They are both good stories, but being unrelated they pull at each other for attention.  And given that the second is far more sensationalistic (and is basically why the book has endorsements from a collection of big name writers) it feels a exploitative, like Messner didn't feel that a detective book could sell and so threw in the heavier themes of her second topic.  I honestly think it wasn't necessary:  there's so much about Mia that is inspirational and positive that her story is a winner without any big message attached.

Either way, I enjoyed Mia and I liked her creative ideas and the way she interacted with the other kids.  There's lots of great positive energy here about following your dreams.  The ending gets a bit too perfect and rosy, but not everything works out in Mia's favor and that has lessons as well.  The fact that she is genuinely happy for the success of people other than herself though makes her a real winner in my mind.  And of course watching her seize the day and regain her confidence in the end is the pay off that brings the book to a rewarding close.