Diana and the Island of No Return, by Aisha Saeed 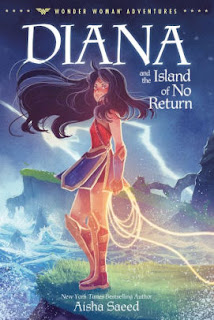 Diana is fierce and brave.  She loves her home on Themyscira and is immensely proud of the work the women of the island perform guarding the entrance to the Underworld.  She begs her mother to let her learn more about fighting, but for now she is largely stuck watching the older women train.

On the eve of an important festival, a spell is cast that puts the adults to sleep.  At around the same time, Diana and her best friend Princess Sakina discover a stowaway boy.  He has cast the spell and begs Diana and Sakina to come with him to his island in order to save his people from a demon who has taken over.  In exchange, he'll reverse the spell. It's a dirty trick, but Diana and Sakina don't see any alternative:  not only because it is the only way to wake the grownups, but also because even little Diana knows that it is her people's duty to fight evil.

And so begins the first in a series of middle grade readers for young fans of Wonder Woman.  It goes without saying that being familiar with the source material will make this a more enjoyable read.  I have not seen the recent films, but I imagine that there are plenty of Easter eggs in the story for fans.  Saeed certainly assumes we know a little about the locale and the characters.  But even so, the book on its own has several things in its favor:  it's fast paced and packed with action.  It also carries on the themes of female empowerment for which the originals are famous.  Even at twelve, Diana is no shrinking violet and makes quite a role model.  She bravely launches forth, even when the odds seem impossibly against her.  She's kind to others and loyal to friends and family.  The story is not terribly deep and my hopes that Saeed would imbue the formula with some deeper meaning are largely disappointed, but it's still a good book.