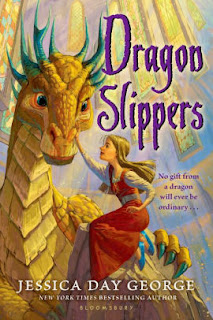 As everyone knows, knights like to rescue maidens from nasty dragons.  And when you're an orphan and your aunt is desperate to get rid of you (and perhaps marry you off to an adventuresome knight in the process), becoming dragon bait is something of a career decision.  But Creel is no ordinary maiden and the dragon (whose name is Theodorus) is no ordinary dragon.  Theodorus would honestly rather not be bothered by pesky knights and has little use for maids.  And, no, unlike all the dragons you've heard spoken of, he doesn't horde gold -- his passion is shoes!

And nowhere else have you ever seen the collection of shoes that this dragon has!  Creel is astounded and quickly reasons that a nice pair of shoes might be the capital she needs to make it on her own in the world.  If she can't be rescued by a prince then maybe relocating to the capital and starting up a dressmaking business would be more practical.  With some negotiation she convinces Theodorus that, given a nice pair of shoes of her choice, she would be happy to leave him in peace.  He agrees but regrets the deal when he sees which pair she has chosen.

And thus a series of events are triggered that will lead to two kingdoms coming to war, the revisiting and settling of ancient scores between humans and dragons, and a young woman finding her place in the world.

The first of a beloved series, this entertaining and well-written middle grade fantasy novel combines a resourceful heroine, some good friends, a love and respect for animals, and just the right amount of action to create a great page-turner.  There are no great moral lessons, beyond the basic lesson that sometimes one has to make brave and bold choices to make one's dreams come true.  It's a fun way to spend a Saturday!