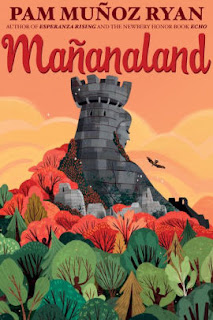 Max loves fairy tales and the stories that Buelo tells about a dragon and the abandoned tower near their village are his favorite.  Max loves soccer and, along with his friends, hopes to be picked by a trainer and get to attend a clinic, leading to a professional career.  But most of all, Max wonders why his mother left and where she went.  Neither Papa nor Buelo will tell him anything about it.  But they know something!  Max can tell that there are secrets in his family.

Then one night a priest comes to their home with a request and Max suddenly knows what he must do.  Embarking on a dangerous mission he realizes he's been preparing for his entire short life, he finally comes to understand his family's secret and his family's debt to society.  Along the way, he also realizes that there are things far more important than soccer and far more fantastic than fairy tales.

A sweet novel that continues Ryan's amazing track record for producing culturally rich and authentic Hispanic novels.  Mixing a bit of magic, a lot of local flavor, and appealing characters, the book is a rewarding read.  This one bites off a bit more than Ryan's previous books, introducing the mature themes of political asylum-seeking and immigration in a gentle age-appropriate way.  This never becomes preachy but instead addresses the way political unrest and involuntary migration have affected Central American communities as much as fútbol.  The beautiful simple writing, cultural depth, and ultimate message about doing good turns for each other makes this short novel a winner!