The Girl Who Drank the Moon, by Kelly Barnhill 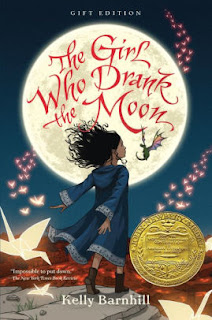 Fear of the evil witch in the woods who would destroy them, drives the inhabitants of the Protectorate to sacrifice a baby each year.  The parents grieve their loss, but no one questions and no one resists.  That is, until the year that the mother refuses to cooperate and is thrown into the tower as a prisoner and goes mad.  But this seems only a minor hiccup in the process of law and order as, like all the other children, her daughter is left in the woods to be devoured by the witch.

But Xan, who lives peacefully in the woods with a verse-loving bog monster named Glerk and a tiny dragon with a big heart named Fyrian, doesn't eat the abandoned babies.  Instead, she rescues them and carries through through the woods to cities on the other side, finding suitable homes for the children.  This time, however, Xan accidentally feeds the baby girl moonlight, imbuing her with magic.  Such a baby can't be handed over to mere mortals and must remain with Xan, who names her Luna.

Luna, a magicked baby with omnipotent powers is a danger to herself and others.  When Xan finds that she cannot control Luna and keep her safe, she makes a fateful decision to suppress Luna's powers until her thirteenth birthday when everything must burst forth of its own accord and Luna will discover her full potential.  That potentially heavy handed way to approach puberty and coming of age is handled in a restrained fashion, in a story which has much more to say about the power of kindness and love and its ability to overcome grief and sadness.

For the real story here is about the Protectorate and its reliance upon fear and the importance it puts on the oppressive ritual of annual sacrifice.  About how a community that willingly submits to such rituals, reinforced by myths that are never questioned, creates a false sense of security and ossifies a power structure.  While Luna, her development to adulthood, and her magic have a role to play in this story, it is really the people of her home (and in particular the mothers who have sacrificed their children) that ultimately become the tipping point that changes the status quo and literally destroys the barriers that have fogged people's views.

The politics implicit in this less subtle and more important message are tragically likely to have timeless appeal.  The complexity of the story probably won't turn this into a classic anytime soon, but it did win the 2017 Newberry which will guarantee it some longevity on public library bookshelves.  It's entertaining and heartfelt, but restrained when it might be exuberant.  Whether its Luna's apprehension of adolescence, playing down the antics of Glerk and Flyrian (who would in any Disney adaptation become comic sidekicks), or having a male protagonist who turns out to be neither romantic interest nor hero, Barnhill surprises not by what she brings to the story, but what she doesn't do with it.  Instead, her focus lies on the less commented parts of a fairy tale (the power of helpers, the regrets of the elderly, and the cowardice of power) that make her story unique and memorable.