The List of Things That Will Not Change, by Rebecca Stead 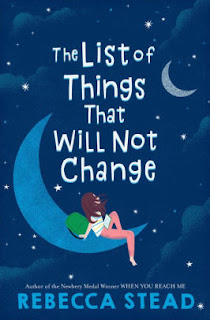 When Bea's father announces that he and his partner Jesse are going to get married, she gives no thought to her Dad marrying another man.  She's known he was gay since her parents separated.  She's just happy that he and Jesse are happy together.  She also has little concern for the fact that he and Mom will never get back together.  That doesn't matter because her parents have promised her that there are things in this world that will not change and they have written them down (in a special green notebook in green ink!):  Mom loves her, Dad loves her, Mom and Dad still love each other (but in a different way), and so on.  With this list to give her strength, Bea knows she can face the world.

So, what is the most important part of her father's wedding plans?  Bea is going to get a sister out of the deal!  Sonia is the same age (10) as Bea and Bea knows that they are going to be great friends.  But when Sonia shows up, things don't go quite as smooth as Bea had hoped.  Sonia seems lonely and sad and doesn't want to share feelings and talk about everything the way Bea does.  For Bea, not having things go her way is hard.  When people don't act the way she expects, she gets angry and then she gets very sad.

With so many changes going on around her, it's hard to control her anger and frustration.  But controlling her feelings is what Bea learns to do.  And as two families come to together to celebrate the creation of a new family, Bea learns some lessons about how hard it is even for adults to get beyond their surprise and hurt.

This story of growth, acceptance, and love is all softly dealt by the author.  Even serious topics like homophobia and divorce are pitched in a gentle age-appropriate way for a middle grade audience.  The book is largely a string of anecdotes and recollections.  Ostensibly they lead up to the wedding and Bea's confrontation of some suppressed feelings, but it is really just catching up with Bea, hearing her stories, and sharing her feelings.