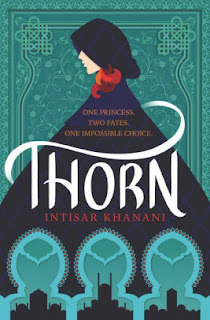 Princess Alyrra has never known how to wield power in court.  Instead, she has found herself the pawn in other people's games. Her mother writes her off as useless and her brother physically abuses her at will.  She is a non-entity, a nobody, and everyone -- including herself -- knows it.  So, why has the most powerful king in the land come to Alyrra's tiny little corner to ask for her betrothal to his son, the crown prince?  She doesn't even know the prince and he, as far as she knows, knows nothing of her.  Something is going on here and neither she nor her mother can figure it out.  Alyrra's mother is anxious that things go well and that the family benefits from it.  Her decision on how to maintain control over her daughter is cruel.  Alyrra is sent to her betrothed with a companion -- her arch nemesis Valka -- who conspires against her but will do a better job at defending the family name, in her mother's opinion.

So, it was always going to be a difficult task (traveling to a foreign kingdom, becoming queen of unfamiliar people, and winning their loyalty), but it keeps getting harder.  Even before Alyrra and her party arrive at their new home, she is attacked by a sorceress who body swaps her with Valka.  Her enemy becomes her mistress, with predictable results.  Valka, now in the guise of the princess, quickly manipulates events to her favor, willfully ignorant that she is herself being played for some greater end.  Alyrra, sent in disgrace to the lowly job of goose girl, finds she is strangely at peace with her new role.  She embraces the simpler life and the ability to be free of the cruelties of court life.  But with a plot afoot and a sorceress with an unknown agenda, Alyrra is pressed involuntarily to a calling -- one that will take more bravery and strength than she ever knew she possessed.

An extremely rewarding fantasy, with a combination of a strong dramatic arc, complex characters, and a byzantine plot.  What makes it work is the character of Alyrra, who maintains a fine sense of decency and goodness while she grows from idealistically well-meaning but weak girl to become driven and strong young woman.  This is what fantasy is for, after all, showing us the core good and bad that humans can do in a world that is less fettered by mundane reality.  The climax takes it to an extreme: pitting the conflict in its starkest terms.  If you were suddenly given the opportunity to exact revenge for all the wrongs inflicted on you, would you seize the opportunity or would you voluntarily relinquish that power in the name of maintaining your decency?  And is the temptation to exact revenge in the first place a sin?

If those deep thoughts are too much for you to stomach, don't worry!  There is enough action and adventure going on here to reward a surface read.  With an internal power struggle, a family curse, political corruption, magic, crime, and deeply rooted social injustice, there is a little bit of everything for everyone in this one!

A subject matter warning.  There are several scenes of sexual (and sexualized) violence in this novel.  If rape, sexual assault, and domestic violence are triggers for you, you may want to approach this novel with caution.  None of the events are explicitly described, but they are prominent and central to the story.  The author uses them to make a strong statement against sexual violence directed at women so one may argue that the prominent place is appropriate, but some readers may prefer to avoid the book altogether on this account.