Time of Our Lives, by Emily Wibberley and Austin Siegemund-Broka 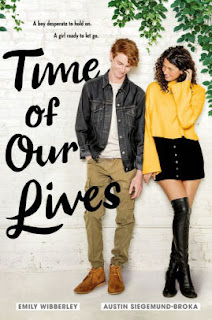 Fitz is a reluctant prospective student.  It's not that he doesn't want to go to college, but rather that he knows that looking at other schools is a waste of time.  He's got the grades to attend pretty much anywhere he wants, but with his mother's failing health, he'll have to stick close to home.  Still, to make his mother happy, he's embarked on a week-long college visit tour of the northeast.

Juniper longs to go away to school.  She too has the grades and she's determined to go as far away as she can.  Being the eldest child in a large family however means that she's constantly in demand and that her family is reluctant to have her go away.  They are less-than-thrilled that she is considering schools that are not nearby and vocally unsupportive of her desire to move away.  But, in spite of her family's pressure, Juniper is set to find the school of her dreams and to do so with or without her family's help.

Fitz and Juniper cross paths in Boston at the beginning of their respective trips and then subsequently continue running into each other as they wind up visiting the same schools.  By the time they've worked their way to New York, they are basically traveling together.  Predictably enough, a romance develops, but its overshadowed by the emotional baggage that they each bring to their college search.

There are strikingly few YA books that deal with adolescent apprehensions about going away to college.  There are plenty of melancholy memories of final summers and lots of impatient longings for moving away, but the more quieter meditations on the end of childhood are surprisingly few.  And this is a surprisingly good contribution to the topic.  The characters are interesting and their well-researched roadtrip of Ivies and well-known state schools is fun and familiar to anyone who has attended such schools.  Personally, I was most drawn to the kids' apprehensions of the future, but there's plenty of other things going on here.

Moreover, the co-writing team of Wibberley and Siegemund-Broka has surprising chemistry.  Co-authored novels are inevitably battles of egos and styles.  You usually can tell who is writing what and there's usually some tension as the writers force each other into places that you can tell they don't want to go.  I didn't get that sense here.  As the authors pass the baton, there is instead a warmth, as if the other can't wait to continue what has been written so far. It makes the reading all the more joyful.