We Dream of Space, by Erin Entrada Kelly 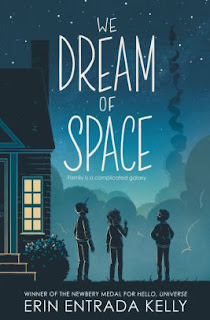 In January 1986, Bird and her classmates are infected with space fever.  The Challenger is about to send the first teacher into space and schoolchildren across the country are studying space and the space program in preparation for the launch.  Bird's science class has split into teams of seven to match each member of the crew so the kids can be prepared to watch every step of the mission and write about it.  Most of the kids are bored, but Brid is in heaven!

Bird loves space, science, and taking things apart and drawing their innards.  She's endlessly fascinated by what makes things work.  And like she does with complicated machinery, she's dissected her family and noticed how her parents are always fighting, how her older brother Cash can't seem to find any enthusiasm for studying, and how her other brother Fitch is prone to sudden angry fits and spasms.  In sum, how her complicated dysfunctional family operates.  She'd like to feel she can control things by drawing their schematics, but when she watches her dreams literally explode in front of her, she faces a choice between giving up and change.  In doing so, she discovers unexpected allies.

A promising story with a strong and poignant ending suffers from a slow moving and poorly constructed plot.  While the book certainly made me flash back to where I was in 1986 (sophomore in college, hanging out in my dorm's kitchen when I heard the news), the story really didn't live up to its hype or its promise.  And there is a deeper frustration at how little is resolved in the story and its general downer conclusion.  There are so many things hinted at in the story, but none of them are really followed up on.