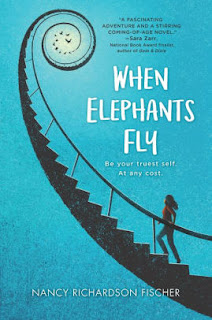 Lily is haunted by her family's history of mental illness.  When she was seven, her mother's schizophrenia drove her to nearly kill her daughter and to eventually kill herself.  Schizophrenia runs in families and.  Ever since then, Lily has been obsessed with the idea that schizophrenia usually manifests itself between the ages of 18 and 30.  She has worked out a "twelve year plan" with her best friend Sawyer.  All she has to do, she believes, is get through those twelve years without stress or trauma and she will be clear.

Her eighteenth year has been going well so far.  She has an internship at the local newspaper.  Her assignment covering the birth of a baby elephant in captivity at the local zoo seems harmless enough. But when Lily witnesses the mother elephant turning hostile and attacking the baby, Lily is reminded of her own trauma. Rather than drive her away, the experience makes her resolute about defending the baby.  Lily gets drawn into a legal struggle to rescue the baby elephant that eventually sends her on a desperate flight to save it and definitely does not fit in her twelve year plan!

An ambitious and mostly successful coming of age story.  A number of great ideas (like Lily's constant questioning of her sanity, potential romantic sparks with Sawyer and co-conspirator Otis, and finally her reconciliation with her father)  never quite go anywhere, but the story is really about the baby elephant and Lily's bond with it.  The writer has an obsession with gross bodily fluids, but that serves to impart a lot of information about what it takes to keep an abandoned infant elephants alive in captivity.  And Fischer takes both zoos and circuses to task for their treatment of wild animals.  In sum, the adventure is satisfyingly dramatic and keeps you engaged.  It is a decent read, but falls short of living up to its ambitions of being a multithreaded psychological drama.