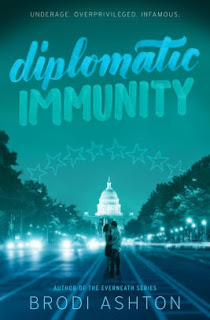 Piper dreams of becoming a journalist.  But to realize her dream, she needs to get into a journalism program and to do that she needs someone to pay for it.  That has always made the prestigious teen journalism-focused Bennington scholarship part of her plan.  Attending the elite Chiswick Academy in DC is part of the plan as well and when Piper gets a scholarship mid-way through her senior year to finally go she knows she has to move fast to be a contender for the Bennington.  But what can she write about?

Chiswick has a large foreign student contingent, made up mostly of the children of diplomats.  These golden kids flaunt their privilege and their unique ability to weasel out of trouble.  It's diplomatic immunity, both in the literal sense or simply from the ability to invoke the names of their powerful parents to get out of tight situations.  For scholarship kids like Piper, it all seems terribly unfair.

And then suddenly Piper realizes she has her story.  Ingratiating herself with Raf, the son of the Spanish ambassador, she slips into the private world of expat parties, where alcohol and drugs flow freely.  But as Piper collects her material, she finds herself growing close to Raf in a distinctly non-professional way. She realizes she has to choose between her ambition and her heart.

A well written, but mostly by-the-numbers YA romance.  Nothing really shouts out in this story.  The characters are fine but break no major new territory.  The romance has some nice moments but doesn't particularly heat up.  The scandal and action are slow moving.  It reads fast but doesn't deliver any notable punch.