Echoes Between Us, by Katie McGarry 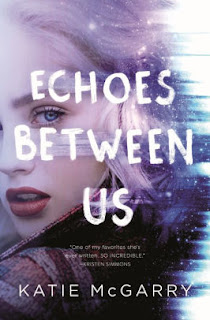 Veronica lives with death.  There's the tumor in her brain that causes her unbearable migraines and whose severity she hides from her Dad.  And there's also the ghost of her dead mother that haunts the house and keeps her company, giving her the strength to face her illness.

Downstairs, in the apartment that they rent out, is Sawyer and his mother and little sister.  Veronica knows Sawyer but they are not on good terms.  Sawyer's part of a popular clique and he and his friends delight to tormenting Veronica and her friends.  They shouldn't even be talking to each other, but Veronica has an intuition about him.  When she finds herself needing a partner for their senior project, she reaches out to him.  Sawyer, for reasons that mystify his friends, accepts.

But as far as surprises are concerned, Sawyer turns out to be much more complex than even Veronica could imagine.  He's covering for his mother's erratic behavior, justifying her drinking, and trying to make everything look normal.  Things are far from normal.  Sawyer's getting injured and hurt, and the truth is that he's inflicting it on himself.

A girl with her mind set on dying and a boy being driven to self-destruction make a complex and powerful couple.  The novel, which adds supernatural and historical elements (a diary written by a young woman dying of TB in 1918 plays a part) to its tale of addiction and learning to let go, is ambitious.  Parts of it work well, others do not.  It is difficult initially to see much of a connection between the two very different struggles that Veronica and Sawyer face, but it eventually comes together powerfully.  The attempt to draw pathos from the historical tie-in to the diary and a nearby abandoned TB hospital falls resoundingly flat and contrived.  It's not an easy read and may not be to many people's tastes, but I found it interesting, challenging, and ultimately rewarding.