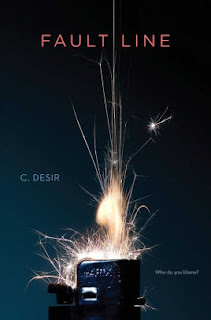 Ben and new girl Ani hit it off at the beginning of senior year.  It's a great relationship.  Ani is spunky and spirited and knows how to keep Ben on his toes.  Ben adores her.  They have even begun to think of spending the summer after graduation taking a road trip across the United States.  But then there's a party that Ben can't go to and something happens.  Ani's best friend Kate calls Ben and begs him to come to the hospital.  Ani's been hurt.

When Ben gets there he learns that Ani's been raped, but she can't remember what happened.  Everyone else seems to know, however, and soon afterwards the rumors start spreading around the school.  About what Ani did and how much fun she had doing it.  Ben knows these are lies but they still hurt to hear.  He wants to defend Ani and take care of her, but she won't let anyone help her.  Instead, she closes off and pushes away all of her friends.  And Ben watches helplessly as her life spins out of control, taking him down with her.

Dark and depressing with an ending that left me deeply unsatisfied, the novel is hard to like.  I appreciated the nuanced portrayal of Ani and the depth of Ben's feelings. His struggle between acknowledging his own pain and the need to be supportive of Ani felt very immediate and sympathetic.  Ben is a bit too much of a tough guy jock for my tastes, but he you feel for how he is way out of his depth.  Not that any of his efforts really matter because Ani is pretty determined to be her own worst enemy.  And that's largely what makes this book so hard to take.  The story is not ultimately about rescuing Ani but about rescuing Ben, and I didn't really care as much about him.