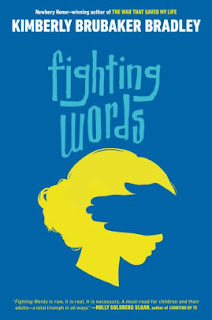 Ten year-old Della likes to think of herself as a wolf, in the sense that she is brave and fearless.  But wolves don't act alone.  Like a wolf relies on their pack for survival, Della has always relied on her older sister Suki.  Suki has always been there for Della, when Mom was arrested years ago for meth and through years sexual abuse.  And now that the man who abused them is awaiting trial and the girls have been taken in by foster care, Della assumes that things will stay like that.  But Suki is tired of the responsibility and Della feels rejected and resentful at the changes.

Neither girl has much trust and faith in adults, but while Suki hides and lays low, Della wants to take on the whole world.  She's eager to testify in court against their abuser and she even fights back against a bully in school who is touching the girls inappropriately.  She can't understand why her sister won't fight as well.

As a middle grade reader, this story of drug abuse, sexual abuse, and self-harm is pretty intense subject matter, but the book could find its audience with some guidance.  The book contains a series of talking point questions at the back that could help adults guide children through this.  Moreover, the story is full of supportive adults, which will help younger readers deal with the scary parts, but is also a problematic aspect of the book. Della and Suki's good fortune in finding grownups willing to fight for them isn't as common of an experience for young victims as we would like and seems mildly implausible.  It's a fine line between wanting to make make this story appropriately reassuring for young readers, while still maintaining authenticity.

It's certainly powerfully written.  I especially liked the idea of bring in the classroom bully as it pulls the story down into a microcosm that is easier to understand.  A ten year old boy who doesn't comprehend why his fun is harmful makes a poignant contrast to the grownup bogeyman of the adult molester (who we never - thankfully - encounter in the story).  The boy's mother's incomprehension of the danger of her son's behavior is chilling but sadly not explored.  The overall message about the need to bring childhood sexual abuse into the open is well presented and the fact that it will make many readers uncomfortable is probably the most convincing argument for the importance of this book.