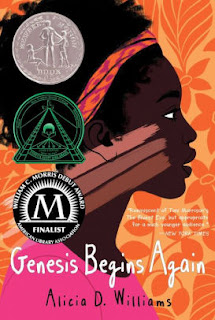 When Genesis and her family get evicted, it's just the latest in a series of hardships she and her mother have had to endure.  Neither of them can believe it when her father takes them to a fancy suburban house in a nice neighborhood.  No way they can afford it but Dad promises that things are going to change.  But as much as Genesis wants to believe it, she knows that Daddy loves the bottle more than her and Mama.  And she can even tell you why:  her skin is too dark. Mama has lighter skin, but Genesis's is as black as Daddy (or, as her maternal grandmother informs her, darker than a grocery bag!).  And by that measure and other things like her nappy hair, she knows that she's not worth much.  She's even developed a long list of things that are wrong with her to keep track of all of the reasons that she dislikes herself. But when the kids at her new school start acting friendly and her attempts to "fix" her problems just make things worse, Genesis has to reevaluate her explanations and consider the possibility that there's nothing wrong with herself at all.

A poignant and often painful novel of a young girl with a serious self-esteem problem.  While I'm hardly an expert in African-American YA, Colorism is a delicate and uncommon subject and I liked the treatment here.  For me, it opened a window on a world I have never seen.  For young readers of color, it could possibly mean even more.

Genesis can be a bit hard to take.  She often is her own worst enemy in her harsh self-judgements.  She's makes poor decisions and has trouble accepting responsibility (a trait that she insightfully realizes is learned from her father).  She's often not as kind or as loyal as she ought to be.  But she has a great sense of inner strength and stands up for herself.  Her journey from self-loathing to qualified acceptance is realistically portrayed and fulfilling to share.