I Love You So Mochi, by Sarah Kuhn 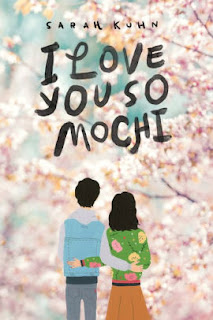 There is a subgenre of YA and NA literature that I like to call "tour guide romance" which basically consists of a story about a young woman who travels somewhere (usually overseas), meets a foreign boy, and tours the exotic scenery.  Most of the time, one suspects that the author has herself been to the milieu in question and started planning the novel during their trip.  Such stories usually consist of key tourist must-sees being used as a backdrops for a trans-continental romance.  Local culture is studied, kissing occurs, and occasionally cultural differences cause complications.  Eventually, the girl and boy come face to face with the reality that, in a few short days, their special romance will become long-distance.  Cinematic versions of this include Karate Kid 2 and Before Sunrise, but there are far more numerous examples that have never made it to the silver screen.  The key to the success of any new contribution is the ability of the author to capture what makes the chosen locale interesting and finding some way to imbue the local culture seamlessly into the story.

I Love You So Mochi follows Kimi's trip to Kyoto, ostensibly to meet her maternal grandparents and get some distance from her mother, with whom she is currently fighting.  The love interest is Akira, a young man helping his uncle sell mochi balls, but who dreams of studying to become a doctor.  Kimi doesn't know what she wants to do with her life, but she does know that she doesn't want to be a painter, even though she's been accepted to an art school.  That decision, with surprised both her and her mother, is why things have grown so tense between them.  But what else could she do when it was clear that art did not bring her joy?

As far as her actual desires are concerned, the only thing that Kimi really likes doing is designing outfits for herself and her friends.  Why this doesn't occur to her as a career choice until half-way through the book is a mystery, but it at least provides a pretext over which Kimi and Akira can bond.

The story is full of lots of cultural detail and given some emotional punch by the strained dynamics between Kimi, her mother, and her grandparents, but one can't escape a sense that this is playing safely by a formula.  Family conflict, romance, and the requisite cultural detail are all inserted at the right spots and worked through appropriately.  Grandparents are charming, boy is amazingly supportive, and BFFs at home are peripheral.  It's a charming read, but there are no surprises and, aside from the local flavor, not much value imparted.