I'll Be the One, by Lyla Lee 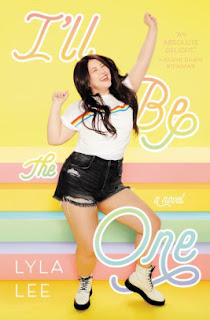 Skye loves dancing and singing.  She dreams of one day becoming a K-pop performer, but the reality is that Korean culture expects female performers to be thin and petite.  Skye is strong and healthy, but not some 110-pound waif.  Her mother repeatedly warns her that she needs to lose weight if she has any hope of becoming famous.

When a contest in announced in LA for contestants in a new Korean entertainment competition, Skye is so psyched to be in it, but her mother won't even allow her to take part (her father has to step in to give permission).  But sixteen years of being bullied and fatshamed has toughened Skye and she is determined to prove her mother, a bullying judge, and all the doubters in the world that fat girls can dance and sing and do it well!  Along the way, she wins the heart of the cute boy and makes a great group of friends as well.

Its a story told in a rich cultural context.  Not knowing much about K-pop, I surmise that the author has done her homework (and/or is a serious fan).  She name drops plenty of real groups and songs, and tirelessly notes what makes particular songs significant.  A similar love is given to Korean food and culture.  For outsiders, this culture lesson is really the best part and is effortlessly delivered alongside the winning storyline.

In sum, this is a feel good romance about body positivity.  There's no end to the trials that Skye endures ranging from thoughtless comments to outright emotional abuse, but Skye is a poster child for standing up for herself.  One wonders exactly where she got this strength, but Lee's not terribly interested in exploring the sources for Skye's strength as she is in promoting the healthy result.  There's a similar approach to the mother's cruel emotional abuse, which is ultimately and disappointingly side-stepped.  The mother's behavior goes far beyond Tiger Mom stereotypes into darker spaces, but this is far too lighthearted of a book to dwell on anything truly serious.  A rousing climax complete with song and dance and a curtly dismissed villainess wraps up the adventure satisfactorily.