It Sounded Better in My Head, by Nina Kenwood 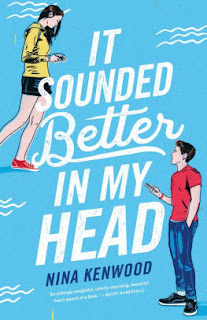 Natalie's parents take ten months to get around to telling her -- on Christmas Day! -- that they are getting divorced, her two best friends Zach and Lucy are suddenly a couple, and Zach's brother Alex may like her (but she can't really tell!).  Everything confuses Natalie.  And it couldn't happen at a worse time.  Now that Natalie's eighteen, she has to figure out what she'll do with her life.  She'd put the whole business off, imagining she'd live at home forever (no longer an option as her parents are downsizing).  And boyfriends?  Well, it was never going to happen!  Natalie's her own worst enemy, finding a way to sabotage every chance of romance, which is what makes Alex's interest in her all the more perplexing.

Aussie YA is seemingly always a challenge for me.  For reasons I can't really explain, I leave more Australian YA novels unfinished than I complete.  Usually, the storylines simply don't engage.  It isn't so much the cultural differences but really the overly dense style that seems to predominate.  This novel is no exception.  I struggled throughout to track the action which jumps through a large number of parties and dramatic interactions with decisions and actions that don't instinctively make sense.  But what made the book ultimately work for me was Natalie herself.  I stopped worrying about what she was doing and spent more time listening to her.

Natalie is ostensibly as much of a navel-gazing angst-ridden teen girl as you will ever find in YA, but the extent to which she self-doubts and owns that doubting is adorable and outright hilarious.  Natalie's fumbled seduction attempt on Alex had me in stitches. The best part of being witty and self-deprecating at the same time is that we can sympathize with her flaws and easily admit to the ones that we resemble far too closely.  So, while I have only a vague sense of what the book was actually about, I loved the heroine!