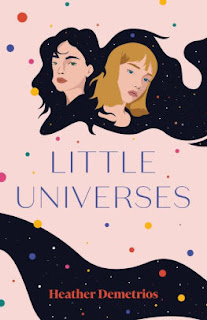 Mae and Hannah are close to each other, but there are forces in the universe trying to pull them apart.  In the middle of their senior year, their parents are called by a typhoon while vacationing.  With their parents gone, the girls are forced to relocate to Boston to live with their aunt and uncle.  That would be trauma enough for two girls in the middle of their last year, but even before the loss, Hannah was struggling with drug addiction and grieving over her decision a few months earlier to terminate her pregnancy.  The rest of this long novel deals with the ways that the girls cope (or mostly don't cope) with their circumstances and their losses.

From the start, Hannah obviously seems the least stable of the pair.  Already struggling with staying clean, she befriends a drug dealer at school, who turns out in the end to be a pretty good guy (and gives up dealing along the way).  Her role in the story is to attempt to stay sober, broken up periodically by relapses that throw the rest of the family into turmoil.

In comparison, Mae's the shining star.  With an excellent academic record, she's heading to Annapolis to become a fighter pilot, a test pilot, and (eventually) an astronaut.  But while Hannah's problems threaten to derail her, Mae is actually less in control than she imagines.  The loss of her parents (and her father in particular) and the cruel reality that she might not be able to save her sister is nearly impossible for her to accept and this makes her ultimately the least stable of the sisters.

Along with the grieving process, family secrets come out that threaten the image of perfection that the girls had about their parents.  Neither one of girls is particularly adept at handling this reality.

The result is a very long (and emotionally painful) novel that explores the many ways that hurting people can hurt each other further.  It's not a particularly redeeming trip and one wonders if some of their issues couldn't have been resolved quicker with a pet or a good project to distract them and give them some purpose.  Because, while their aunt and uncle encourage them to find things to do, it is obvious that Hannah prefers her drugs and Mae prefers having her sister to take care of.  That makes for a pretty tiresome read. With lots of room to work with, the characters are really well developed and identifiable.  I just didn't have much interest in them in the end.

The story is well written, with lovely philosophizing on topics ranging from Yoko Ono to the nature of the universe.  But when your story is basically about two people trudging through grieving with nothing much to say beyond the fact that it's tough, you just don't have much of a literary purpose.