The Ballad of Ami Miles, by Kristy Dallas Alley 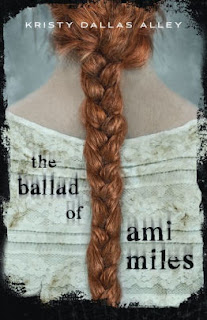 In post-apocalyptic Alabama, Ami lives with her grandparents, aunts, and uncles at the Heavenly Shepherd compound.  Great grandfather packed away supplies so the family would be well taken care of and they just laid low, studying the Bible and living a righteous and obedient life.  Mama had to flee a few years ago when the government rounded up the few remaining fertile women and Ami hasn't seen her since.  It's safe here and Ami is well-fed, but the strict rules and the lack of anyone Ami's age makes it a lonely existence.  The final straw comes when her grandparents announce that she has to marry an older man she's just met in order to preserve the family line.  With help from her uncles and aunts, Ami flees for freedom.

Searching for her mother, she ends up at a repurposed campground with people who have different ideas about how to live -- ideas that shock Ami and open up her horizons at the same time.  The stories she was told growing up turn out to not be so true and the principles she has lived by turn out to not be so useful.  Life is very much more complex than she ever imagined.

Like Ami's struggle with her perceived reality, my notions of what the template for a dystopian novel should got really shook up by this novel.  I expected ruined towns, anarchic bandits, and some big final showdown with the family she left behind.  Some of that happened, but not quite as I expected.  No guns are fired.  No zombies or enemy armies.  No one dies in the entire book.  And the bad guys are profoundly ineffectual and inconsequential.  What I totally did not count on was the human coming-of-age story for Ami.  Rather than action and adventure, the drama of the story comes a very sweet romance and a complex coming to terms between Ami and her mother.  Both provide depth to this novel that takes the dystopian framework and crafts a profound story about exercising freedom of choice.