The Burning, by Laura Bates 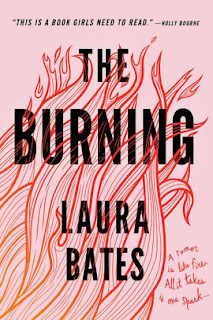 Meanwhile, it doesn't take long until some of the students in her school track down her past and soon the harassment resurfaces.  The attacks spread beyond her to encompass her friends and her family.  As they do, Anna is struck by the similarities between her situation and that of the subject of her study.  A series of historical flashbacks help make the parallels clearer.  The school, unable and unwilling to help Anna, allow the bullying to continue until Anna and her mother finally stand up to it.  The witch fares less well.

British YA tends to be pretty heavy handed, especially with hot button social topics like this, but I was actually pleased at how few polemics were in this story.  While I am shocked at the ineffective adults and the non-existence of law enforcement (does Scottish law tolerate child porn more than the US?), it does permit Anna to defend herself, which is ultimately more fulfilling.  The juxtaposition of Anna and Maggie (the accused witch) is surprisingly effective.  It lack historical integrity, but serves its literary purpose quite well providing a stark parallel in how latent misogyny tends to emerge in mob rule situations.  No real surprises in other words, but if it fires up a couple young readers, then no foul!  Helpful discussion questions provided at the end of the book for those young people who are forced to read this instead.