The Willoughbys Return, by Lois Lowry 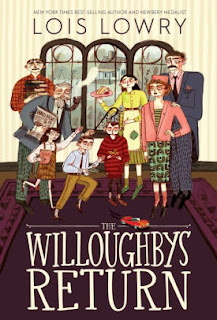 Thirty years have passed since Mr. and Mrs.Willoughby froze on a Swiss mountaintop.  Now, thanks to global warming, they have thawed out.  Completely unaware that they have been gone for the past three decades, they are flummoxed by the fact that no one seems to speak English anymore.  Everyone is talking about "googling" and "YouTubing." Convinced that "Uber" is some sort of Swiss torture device, their effort to return home is full of adventures.

Meanwhile, the children have grown up.  Tim has taken over Commander Melanoff's confectionary business, but that has fallen on hard times as the American Dental Association has managed to get candy outlawed.  With possession of Lickety Twists now considered a felony, the fortunes of the family are about to collapse.

Tim's son, Richie has every toy one could want, but is lonely.  He finds friendship next door with the impoverished (and aptly named) Poore children.  Their father, an unsuccessful encyclopedia salesman has left the family with no means of support.  To eke a living, they open a B and B which brings in some special guests.  All these various chaotic pieces end up well enough in the end, in a way that Willoughbys always seem to do.

Sadly, the sequel is not nearly as charming as the original installment.  The same rude Lemony Snicket-style humor of the original is present, but the clever satire is missing.  In its place, the theme seems to be encyclopedias and a criticism of the modern obsession with technology, but this is neither very funny nor terribly original.  In particular, Lowry has a peculiar notion of how much/little has changed in the past thirty years (microwave ovens and bed and breakfasts, for example, were already well known thirty years ago).  The original's send-up of classic children's literature and it fancy archaic lexicon was timeless and done in love.  This seems tired and less inspired.