What Stars Are Made Of, by Sarah Allen 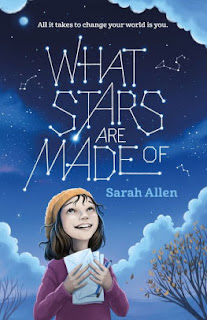 Seventh grader Libby has big dreams.  When she hears that there is a contest being sponsored by the Smithsonian for the best essay on a female pioneer in science, she knows exactly about whom she wants to write:  early astronomer Cecilia Payne (who, among other things, is credited with determining the composition of stars).  Open to children from seventh to twelfth grade, she knows that the competition will be formidable and that she is in way over her head.  That doesn't stop her.  She'll just have to do something really audacious to win!

She has to win the contest.  First of all, the grand prize is a $25K cash prize and Libby wants more than anything to help her older sister and her husband out.  They are in a financial tight spot and Libby knows that the money would make a world of difference, helping them to make a down payment on a new home.  But there is another even more important reason: to prove that she can do it.

Libby has Turner Syndrome, a chromosomal deficiency, which causes numerous physical challenges for her.  Through medication and therapy, she struggles to have a normal day.  Facing bullying from classmates because of physical deformities makes things even harder.  But Libby has learned to persevere and keep positive, summoning up examples like Cecilia Payne to get through the day.

This warm and inspiring story of a girl carrying a whole set of challenges with which to deal but a heart of pure gold hits all of the right spots.  The pitch can stray a bit as she gets pedantic and teacherly, but there is something endearing about Libby's book smarts.  Well read, but socially awkward (there's some intimation that she may be on the spectrum), she uses her knowledge bank to maneuver bravely through situations that she doesn't quite understand.  She makes a few mistakes along the way and is prone to exaggerating her impact on other people's problems, but these flaws is largely sympathetic failings.  With her big heart, Libby shows readers how to be kind without being a pushover, how to be smart without being a snob, and how to be brave without lashing out against others.  While she may not always win her struggles, she's a pretty impressive runner up.  As is this book.

[Fun side note:  There's an excellent biography of Cecilia Payne with the same title for more advanced readers who want to learn more about Libby's inspiration]