Break the Fall, by Jennifer Iacopelli 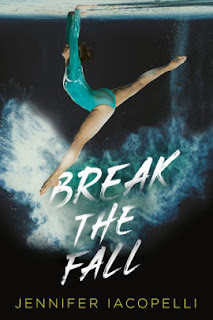 Audrey Lee has been planning her whole life for Olympic gold. But in the aftermath of her victorious bid to qualify for Team USA, there are a series of scandals.  First, a teammate is accused of doping and is disqualified.  Then, a day later, their coach is accused of sexual harassment and rape, blowing open a huge sex scandal in the sport.  With increased media pressure, an active FBI investigation, and growing distrust between members of the team, the gymnasts must somehow put these events aside and continue their focus if they are to reach victory.  For Audrey, all of this comes on top of years of physical injury that mean, regardless of how she does, the Olympics will be her very last competition.

Seemingly torn from the headlines, one of the shocking things about this book is that the real-life sex scandal in women's gymnastics that most resembles the events in the novel (i.e., Terry Gray's arrest) actually happened after this book was published.  That probably says a lot about the sad state of women's gymnastics as a sport beset by so much scandal and so thoroughly in need of some self-examination.

The book aims for a lot of things, but it is unclear where it actually succeeds.  There's a lot of broken storylines: a fairly useless romance, a potential peer conflict between Audrey and some girls who get cut from the team, hints of judging bias, and some tension between Audrey and the replacement coach.  All of these threads could have gone somewhere but never do. Even the main topic (about solidarity in the face of an abuser) is largely anti-climactic and never really developed.  I can understand not wanting to flesh out all of these ideas, but what was the book supposed to be about?   Iacopelli definitely does enjoy describing the blow-by-blow details of a gymnastics match and the fine details of a routine in loving detail.  If you're a serious fan (and someone ho picks up this book is likely to be), that will be a lot of fun.  But without that character development, the action reads like the sports pages and failed to engage me emotionally.