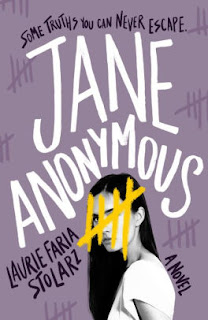 Jane was abducted by a stranger and held captive in a basement cell for seven months until she managed to escape.  Unable to piece together what really happened during those months, she finds her recovery nearly as traumatic as her ordeal.  Central to it all, her attempt to rescue a fellow internee named Mason meets blank incomprehension as no trace can be found of him.  But if he never existed, then who was her sole ally through the months she spent locked up?

A taut and tense thriller that alternates between the time she spent locked up ("then") and the time she spends afterwards trying to recover ("now").  Of the two, "then" is really the most interesting and dramatic. Thankfully it is not nearly as icky as it could have been.  Jane's emotional health takes a beating during her lock up, but thankfully there is no overt violence.  For the subject matter, this is relatively trigger-free.

But the "now" time is more problematic.  I spent much of it in deep frustration watching Jane get some really poor counseling and familial support.  While being kidnapped and locked up is certainly an ordeal, no one should have to suffer through the nearly abusive treatment she receives afterwards.  It seemed unnecessarily cruel and more than a little implausible.  There's also less coherence to the story in "now" as certain threads (e.g., her parent's marital problems) remain frustratingly unresolved and disconnected from the story.