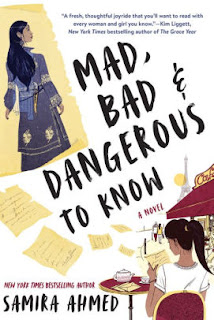 Stung by a humiliating academic failure when her application to art school is rejected, Khayyam accompanies her parents to Paris in disgrace. She was so certain that she had uncovered an earthshattering connection between author Alexandre Dumas and the artist Eugene Delacroix, but her thesis was demolished by the judge.

Her father is French and her mother a Muslim Indian, which makes her an exotic American transplant.  Right now, Khayyam wouldn't mind some quiet to take stock.  In addition to her bungled scholarship application, there's her frustration with her sort-of boyfriend back in Chicago.

But Paris simply takes her closer to the causes of her woes.  Surrounded by the places where Dumas and Delacroix lived, Khayyam picks back up her search.  In the process, she stumbles across a young man with a similar quest (and strangely enough a direct descendent of Dumas!).  Together they learn of a Muslim woman named Leila who crossed paths with not only Dumas and Delacroix, but also with Lord Byron.  A historical mystery (interspersed with Leila's story from her voice) unfolds.  Along with it, a contemporary romance in the streets of Paris develops.

While listed as Young Adult, this literary mystery is really more of an adult novel with a young protagonist.  Khayyam has some angsty teen moments, mostly involving the triangle with her American boyfriend and the young Dumas, but otherwise there is nothing here that particularly speaks to adolescence.  That doesn't mean that young readers will not enjoy the unraveling of the mystery or characters, but simply that the novel will appeal to a broader audience.  As a mystery it works pretty well.

The book is less effective at promoting Ahmed's ideological goals. Using Edward Said's critique of orientalism as a launching point, she uses the example of Leila (and Khayyam's obsession with telling the woman's story) to illustrate the process of giving voice to women in history. Byron, Dumas, and Delacroix and their odious relationships with women make easy cannon fodder and this is entry-level criticism aimed at younger readers. Here, it hangs uneasily, much as her bombastic novel Internment did for anti-Trumpism. The polemic, which only becomes fully developed in the latter part of the novel, does not add much and largely occurs at the cost of Khayyam's story of personal growth and confidence building.