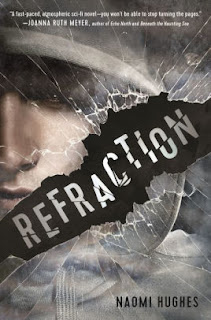 A year ago, an alien spaceship came to Earth.  No one knew what it wanted, but when it broke up in orbit into hundreds of shards and pieces, the world changed.  The stars realigned and the sky darkened.  The world came to an end and only three places still supported life:  London, Singapore, and Cisco Island.  On the latter, a stalwart group struggles to survive, fortifying themselves from the terrors of the mainland.

Reflective surfaces have become portals that spread thick fog everywhere and through which horrible monsters emerge.  Staring into a mirror is suicide and owning one has been quickly outlawed.  But people still needed mirrors, lenses, and other shiny objects and that is where Marty makes a living as an underground dealer in reflective contraband.  It's a dangerous occupation, both because of the materials handled and the classification of dealing as a capital offense, but Marty has no choice.  He needs to find his brother who he believes is in London and getting there is going to take money.

Before he can manage to make the money he needs, Marty gets caught and is summarily exiled from the island.  Along with him is the son of the mayor, exiled for the "crime" of having captured and turned Marty in to the law.  Now, ironically dependent on each other for survival, the two boys try to stay alive in a world of fog and danger.  With the enemy hiding in the fog and reflective surfaces, the paranoia and fear will keep you on the edge of your seat. But as scary as that world is, we quickly learn that the situation is much more complex and terrifying.

This highly entertaining science fiction adventure combines a terrifying premise with complex and interesting characters.  Marty suffers from OCD, which causes minor tics like his need to tap doorframes and triple check locks, but which also plays a significant role in the story.  Without giving away major spoilers, the OCD becomes an integral part of the solution to the story.  His complicated relationship with the mayor's son adds additional tension to the already tense and paranoid setting.  The result is a taut and scary thriller that gave me nightmares.  It stumbles at the end, but mostly because of the impossible standards it sets us up for.  Highly recommended.