The Ballad of Songbirds and Snakes, by Suzanne Collins 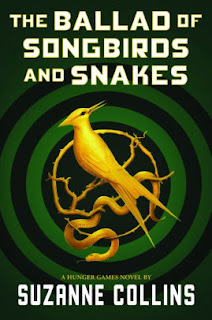 Taking place decades before the events in The Hunger Games trilogy, this prequel gives us a taste of the early years after the war, opening with the tenth Hunger Games.  It is also an opportunity to give us background on Snow and how he came to see a young woman like Katniss Everdeen as his nemesis.

The story begins on familiar ground as we walk through the events of the Hunger Games themselves (as we did in books I and II) but where those were smooth running affairs, it is apparent that at this early date, they were still working out the kinks.  In striking contrast, the body count has racked up long before the Games even start.

Snow is a student at the Academy and in a novel new twist this year the students have been enlisted to "mentor" the tributes.  Snow gets assigned to the female tribute from District 12, Lucy Gray.  She's a musician and and a member of a wandering troupe of romani-like entertainers called the Covey.  Like a gypsy, she flits around in colorful skirts and charms the people around her (including Grey himself) which proves decisive in her ability to stay alive and defeat much more able opponents.  But there is more than charm at play.  They have a mutual shared interest in her staying alive.  Her success in the Games will help Snow get a college scholarship he desperately needs.

That works fine during the Games, but when things go awry and the story shifts to District 12, their roles change.  The mutual interest persist, but there is suspicion and distrust and Snow doesn't know if he can trust her anymore. But in all honesty, could he ever trust her?

There are several things that make this a very different sort of story.  One obvious difference is the point of view.  In the trilogy, we are seeing the world through the eyes of Katniss and her rebellion against the Capital District.  Here, the story is told through Snow and life in the Capital is nowhere near as easy as we have grown used to it.  Some of that is because the Capital is still rebuilding from after the war, but Collins is also showing us that even those who benefit from the power structure suffer.

This is the origin story of a tyrant. While Katniss was heroic and fighting a good fight through most of the story, Snow is a troubling protagonist.  Some of his ideas (in particular his obsession with order and his selfishness) are odious.  One starts feeling uneasy when the book pushes us to root for the oppressors and we hope that the rebels get caught and killed.

But there's more going on in this novel than simply cashing in on the popularity of the trilogy.  While the trilogy used the Games as a metaphor for the cutthroat competition for college placement and job seeking, the goals here are simultaneously grander and more obscure.  Hints of that are seen in the five quotes that precede the story.  The first three come from the trifecta of liberal democracy -- Hobbes, Locke, and Rousseau -- all speaking about the Social Contract.  Wordsworth follows with his ties to Rousseau.  The last quote comes from Mary Shelley's Frankenstein, which might seemingly be intended for the shock value of a monster let loose, but that would ignore Shelley's ties to her parents (Godwin and Wollstonecraft) and their critique of Rousseau.   Although heavy handed, this presages Collins's grander ambition in this story of critiquing the Contract itself.  The idea that we sacrifice our freedom in exchange for the order of authority is a key principle in our culture, and the tension that exists in that surrender was never fully worked out by liberal philosophers.  That it has these nuances is obviously lost on Snow and is the point that Collins in making.  While the Games were presented as a perversion of liberal democracy in the Trilogy, here it is dissected as a central component of it (seen much more clearly in the raw early years of Panem).  In an understanding with more than small nod to Foucault, Collins is demonstrating that the sacrifice of freedom does not give us order, but rather serves us control.

An interesting message to explore in a YA book, but what about the story itself?  It's long and meanders a lot.  Once the Games are over, the story truly drifts away from its focus, but it does eventually come back together in the end, in a rushed finale that solves problems by largely killing off characters (an approach also found in Mockingjay).  This is a less accessible story.  It is hard to imagine someone picking up this book without already having been drawn in by the trilogy.  In sum, not just a prequel but an ambitious political critique that is fated to be read by fans looking for some Katniss magic and disappointed to find only gloomy portents of the things to come.