The Feminist Agenda of Jemima Kincaid, by Kate Hattemer 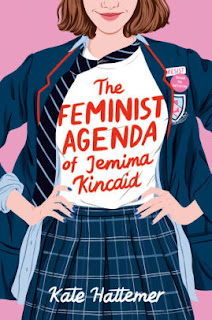 Jemima loves her school but hates its sexist traditions.  Chawton Academy was once all-boys and it shows from its dress codes to its prom.  As a self-described feminist, Jemima has often enjoyed being a thorn in the side of the student body.  Now, in her senior year and sitting in student government, she has an opportunity to change things.  She decides that she wants to shake up the whole ritual of promposals.  Instead of having the boys ask the girls to the prom, she devises the idea of having people enter their choices into a computer program, which will then match up people who have independently chosen each other.  It's clever and surprisingly popular until somehow the choices get leaked, causing embarrassment and anger across the senior class.

Meanwhile, Jemima is struggling with the whole concept of what it means to be a "feminist." After all, when it comes to discriminating, Jemima herself is pretty hard on women.  She does her fair share of disparaging girls who dress fashionably.  And is she really helping when she discounts the chances that her geeky Asian friend Jiyoon could get elected to student government?  Are her attacks on Chawton's traditoins about fighting patriarchy or is she only trying to draw attention to herself?  Closer to home, how should she deal with boys?  That's always been theoretical in the past, but when football player Andy (the object of her current crush) starts showing interest in her, she struggles with how to define what a true feminist would and would not do in response.

A peculiar, but ultimately entertaining romantic comedy.  The prom story is pretty stock material, as are the general characters (jock, queen, nerd, gay sidekick, etc.) but its the treatment which really stands out.  For one thing, there's a lot of explicit sex in the book, described in pretty visceral and physical terms by Jemima.  There's a lot about how good it feels, but not really much about her emotions surrounding it.  I get the idea here (i.e., being sex positive), but it's pretty clinical and not very romantic.  A similar practical approach appears elsewhere as well:  Jemima's potential foil, social director and queen bee Geniffer, turns out to be pretty nice and points out that any antagonism between them is more due to Jemima's judgment (and not anything Gennifer has ever said).  The jocks also prove to be surprisingly reflective and academically-inclined as Hattemer seems to want to flip all of these archetypes on their head.  It makes the book memorable and stand out, although it does grate a bit having people fail to follow their usual assignments.  I'm less sure I agree with Jemima's read on "feminism" but Hattemer has certainly created a memorable read on the idea.