The Loop, by Ben Oliver 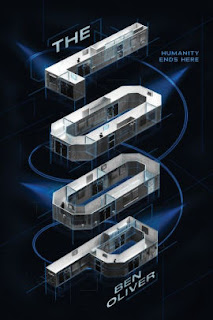 Luke has been imprisoned in the Loop for over two years.  Every day is the same:  stuck in isolation for most of time and subjected every day to body-draining "harvests" where his life force is drained from him as an energy source to power the Loop.  The only thing that lightens his day are the books that a kindly warden brings him to read.  There is no end to this.  Eventually, he will either die or get sent to the Block (a similar jail for adults) and then he will most certainly die.

One day, the routine suddenly stops and the Loop goes quiet.  Something is happening and the only way Luke will find out is to escape the Loop.  With help from other inmates, he manages to do so but what they find outside is even more horrifying: an existential threat to humanity itself.

The great strength of this book is the author's love for nasty sadistic details.  There's sheer delight and glee in the way he documents the inhumane tortures of living in the Loop and then finding equally horrific things to match it on the outside.

It's a very very complex dystopia, but the complexity is the major weakness of the story.  Hemmed in by so many elements, so many characters, and so many rules, the story really struggles to emerge.  Oliver is clever and full of idea, but he's lousy for story and plot.  The story, such as it is, is incoherent and largely pointless.  The heroes show their mettle largely through stupidity, hesitation, and cowardice in the face of raw evil (it's a very uneven match).  There's a mystery unfolding that might explain the contradictions and weird plot twists, but you'll have to read the sequel to have a chance of figuring it out.  There's no conclusion, no real accomplishments, and largely no logic to what happens in this book.  But there are fantastic, gruesome, and nasty details!

I would give this book (and the forthcoming sequel) a hard pass.  It's creative and innovative, but lacks a story or characters worth caring about to support it.