The Quilt Walk, by Sandra Dallas 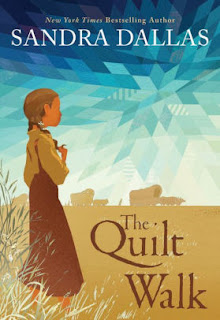 In the spring of 1864, Emmy and her family pull up stakes and leave their home in Quincy, Illinois.  Pa has been out West and has come back with a plan.  He wants them to resettle in Golden, Colorado where he will make a fortune off of folks trying to strike it rich in gold.  Ma isn't convinced, but she has little say in the matter and has to reluctantly say goodbye to her friends and family who remain.  Her only memories are in heirloom quilts that she insists on bringing with them.

With all of their possessions in a wagon, they join other families and travel hundreds of miles across modern-day Missouri and Nebraska.  Disease, hostile animals, Indians, and homesickness plague the wagon train.  Some give up and go back home.

Based on historical fact and full of period details, Emmy's engaging first-person account of life in a wagon train will appeal to middle school readers and to fans of the Little House books.  Dallas's attention to detail certainly feels very familiar (although I think Dallas hasn't tried to cram as much in here which it makes the book an easier read).  As the title suggests, there's a lot said about quilts in the book, but without illustrations or at least a list of titles for suggested further reading, it's a bit of a let down.