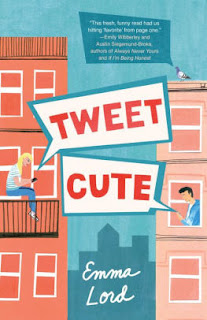 I'm pretty convinced that the challenge I would face in writing decent YA would not come from the difficulty of remembering the trials of adolescence as much as my pedestrian understanding of social media and the prevalence of technology in contemporary adolescent life.  Lots of other authors seem to suffer from that same deficit, so it's nice to read a novel written by someone who handles it all with elan!

Pepper is an academic achiever and a driven perfectionist in everything she attempts, whether it is being captain of the swim team or baking amazing desserts. So when her mother's burger chain business Big League Burgers is struggling to make a bigger impact on Twitter, she naturally agrees to help their hapless social media director.

Jack, who always feel like the lesser of his identical twin brother, does everything he can to help his family running the neighborhood deli.  At school, he's considered something of a clown and not the star achiever that his brother is.  But he has a secret: he's a coding genius and he's created the social media app Weazel which allows students to communicate anonymously.  It is both wildly popular and completely banned by the school.

When Big League Burgers unveils its new sandwich, Jack and his brother notice an uncanny resemblance to their own deli's fave.  Convinced that the corporate giant is trying to steal from their family, they launch an attack on Twitter that takes off.  Soon, although neither one knows initially that the other is behind it, Pepper and Jack find themselves wrestling in an internet battle using their family's corporate accounts.  At the same time, they are similarly haplessly entwined with each other on Weazel.

This update of You've Got Mail has all the usual rom-com charms.  It's a bit crowded between the Twitter battle, Pepper's baking finesse, and the Weazel app, but it manages to tie everything up neatly in the end (with some help from some convenient coincidences).  With all that stuff going all, it's a bit of a slog to get through the first eighty pages.  To really get the storying moving in fact, some of the key elements at the beginning simply drop away (Pepper's grade point average takes a dive, the swimming fades away, etc.).  So, this isn't anything spectacular, but it is fun if you don't overthink it.  And after I've had my head in the world of Panem for three days, I definitely didn't mind some food porn and smoochy bits!