A Home for Goddesses and Dogs, by Leslie Connor 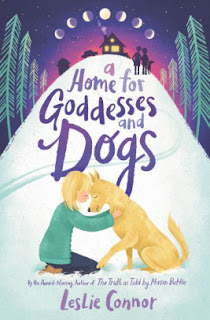 Back when Lydia's mother was still alive, the two of them would work on collages.  Their collages, built off of pictures taken from an old forgotten family album, were their "goddesses" with each one signifying a different trait ("goddess of generosity", "goddess of the third heart", etc.).  Each of them is dear to Lydia now that her mother is gone and one of the very few things she takes with her.  With her father absent (aside from the annual birthday card which Lydia never opens), it's her Aunt who comes to take her home.

She relocates to the small town of Chelmsford, where Lydia's aunt lives with her partner in an old farmhouse with the house's owner, Elloroy.  The same week that Lydia arrives, the women decide to adopt a new dog.  Lydia isn't a dog person, so she isn't too sure about the dog, but despite his issues with becoming housebroken, the animal grows on her.  Likewise, while Lydia struggles with adapting to her new home and with coming to terms with her mother's death, eventually this home for her goddesses and for dogs becomes her home as well.

Full of lovely ideas, the execution of this fresh story of a non-traditional family leaves a lot to be desired.  So many of the themes of the story (adaptation, grief, identity, etc.) are handled piecemeal and largely unresolved.  A very late attempt to work out her father issues is half-hearted and incomplete.  The dog simply exists.  He struggles and she struggles but eventually they sort of bond, and there's no particular breakthrough beyond the realization that they have grown close.  And then there's the odd side trips that the story takes:  the hostile neighbor and a peculiar and upsetting case of animal cruelty,  Neither of these appear to serve much purpose.  The story's overall intent seems to be to simply show Lydia adjusting amidst a variety of challenges, but since none of these directly contribute, we left with wondering what the story was all about.