Burn Our Bodies Down, by Rory Power 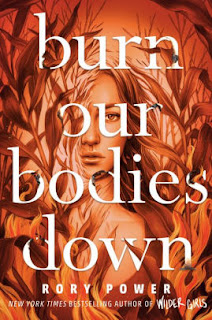 Margot hasn't had much in the world except her mother (which isn't saying much).  Their relationship could at best be called "abusive," with Mom largely neglecting her daughter and leaving the girl struggling to find love and affection, but Margot has had no one else.  When Margot stumbles across the discovery that she has a living  grandmother, and that Gram wants to meet her, she is overwhelmed with the hope of finding love and a home at last.  Despite her mother's warnings, Margot flees to Gram's farm in rural Nebraska.

It is not the warm welcome she was hoping for.  All is definitely not right.  The townspeople eye her suspiciously, accusing of things that they refuse to explain.  A fire kills a girl that no one recognizes, but who bears a striking resemblance to Margot and whom Margot has never seen before.  Gram, denying knowledge of any of this, refuses to explain herself.  The mysteries pile up.

A creepy story that relies largely on gaslighting to propel its story.  It's well written, but the cruelty and abuse that permeates the novel (and is present in every adult character in the book) got to me quickly.  More so since this is a story that would have largely been resolved if people had actually started conversing and comparing notes.  Still, the ending feels compelled to go far into the deep end of implausibility making that ending poetic but a dramatic shambles.  A fast read that never dragged, but it never became particularly enjoyable.