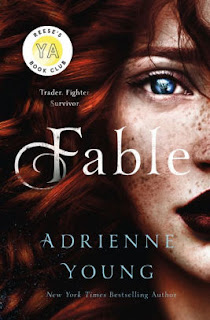 The Narrows are a dangerous place, where traders try to make a living sailing treacherous waters and navigating trade between people who have little and want more. It is a place only for the ruthless. It is a place where whenever you are on the verge of making it, there's someone ready to pull you back down. Nothing is free, Fable's father told her and she's learned the lesson well.  Four years ago, Fable was abandoned to fend for herself on a scrappy island.  Through struggle, ingenuity, and her wits, she's managed to make it to her seventeenth year, but she's running out of options.
Just as she is on the verge of losing her life, she finds rescue from a trader named West who leads a band of four young sailors on a ship called the Marigold.  While Fable wasn't exactly in a place to be choosy, there is definitely something wrong going on here.  In a place like the Narrows, everyone has secrets but the crew of this ship seem to have the sort of past that attracts trouble and gets people killed.  Nonetheless, they manage to reach the port of Ceros where Fable plans to confront her father -- the man who abandoned her four years ago.

Nothing ever works out like one hopes and the Narrows have a way of defeating you just as you think you have won.  Except now, Fable finds she has much more to lose,  "Never, under any circumstance, reveal what or who matters to you," her father also warned.  Far too late, Fable finds that more people are important to her than she have ever realized.

A breathtaking fantasy story set in a naval setting.  Young creates a tense world, teetering unsteadily between order and chaos.  Danger is ever present and haunts these young people's lives. There's never a restful moment in the story (Fair warning: as this book is the first of a duology, you won't even find rest at the end of this book!).  The tense storyline is enhanced by the complex relationships between the five young people on the ship and the overlapping threads with their antagonists.  There's rich drama here/

There is, in fact. much to love in this book:  an immersive and plausible setting with a complex socio-political structure, vivid scenery, lots of naval action, and meaningful human interactions between Fable and the four members of the Marigold.  Romance, a late arrival to this passionate story, almost seems like an unnecessary afterthought, but it certainly doesn't detract from the story.  The focus though is the usual lifeblood of a great adventure:  loyalty, betrayal, legacy, and destiny. A gripping page turner.