In the Role of Brie Hutchens, by Nicole Melleby 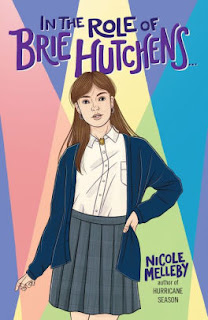 Brie loves soap operas, but she never counted on her eighth-grade life becoming one.  She gets caught by her Mom looking at nude pictures of her favorite soap actress.  Embarrassed and trying to distract her mother, she blurts out that she's been chosen for the honor of crowning the school's statue of Mary.  This is one of the highest honors at her Catholic school and only granted to the very best student.  The problem is that Brie is not that sort of student and the honor has not actually been announced yet.  But if it means keeping her mother from finding out that Brie might like girls, then Brie will do whatever it takes to win that honor.  Along the way there are Brie's dreams of attending a performing arts school next year (too expensive for the family), her father's unemployment and tensions over money in general, and Brie's tentative exploration of her sexual identity with another girl at school.

The result is a wonderful tone-perfect book about coming out, suitable for young people who are aware enough of adult issues to begin YA, but needing the comfort of a middle reader.  While this is an LGTBQ children's book, it moreover a book about learning how to say what you want, how to ask others for respect, and growing up in general.  Brie's struggles with her mother over recognizing her homosexuality are heartbreaking, but credible and sensitively handled.  Her struggle to be acknowledged and accepted by Mom and for her mother's difficulty in letting go is universal enough to be relatable to anyone.  Brie's relationship with the girl she likes, Kennedy, has all of the sweetness and awkwardness that one expects from eighth grade budding romances.  In sum, Melleby has a good ear and had produced an authentic, age-appropriate, and sensitive story about developing sexual identity.