Lila and Hadley, by Kody Keplinger 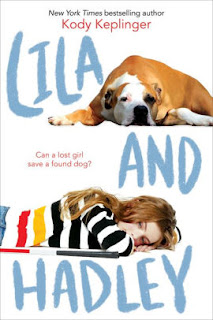 A lot of things lately haven't been going well for Hadley.  Over the last few years, she's been undergoing the loss of her vision and is now legally blind  Because her mother got caught stealing from her employer and been sent to jail, Hadley's had to move in with her older sister, Beth.

She's developed a short temper with good reason.  Having to leave her friends is frustrating.  The way her sister won't stop bugging her about learning how to use a cane before she loses all of her sight makes her angry (even though the truth is she's scared at just how fast her vision is deteriorating).  Her Mom calls every night to talk, but Hadley hates how her mother lied to her and won't pick up the phone.  Hadley is so mad but she doesn't know what to do about it.

One day, when she's forced to accompany her sister to a local animal shelter where Beth works, she chances upon Lila, a shy pit bull.  Something clicks between the two of them, much to the surprise of the staff who have had no luck in socializing and training the dog.  But Hadley sees a kindred spirit in Lila (and Lila seemingly does as well in Hadley).  Can the two of them -- both feeling abandoned, angry, and scared -- save each other?

A fairly predictable middle school animal novel with a lovable dog and a testy protagonist.  Hadley is the weak point to this book.  Keplinger puts a lot of effort into showing how angry she is and while it is understandable that she would be so with all the stuff she's dealing with, it gets wearisome to deal with Hadley's endless rudeness, meanness, and self-centeredness.  The story is about Hadley's growth towards acceptance and inner peace, of course, but it's a story that is poorly plotted.  It's not so much a gradual growth as much simply a sudden stop.  A couple life lessons along the way are intended to provide the justification for change, but we don't see the lessons actually being learned as much as simply occurring.  The narrator's poor grammar works fine in dialogue, but gets excessive and precious in the first-person narration and it actually hinders our ability to see her internalization.  Animal stories work best with humor and hijinks, both of which are lacking for the most part from this story.  More dog and less girl would have made this a better book.