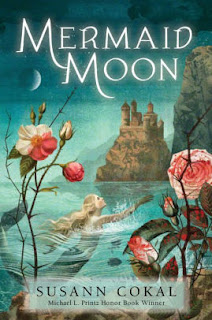 Sanna is not like the other mermaids.  She knows that she obviously has a mother, but no one can remember who she is.  They know that her mother was landish, a human, and for this reason a spell was cast that would cause all concerned to forget about each other.  Now, Sanna wants to find her.  An old witch helps transform her into a landish girl so she can do her search.

On dry land, her sudden appearance and an incident involving the transforming of roses during a feast day cause her to be mistaken for a saint.  As a result, she comes to the attention of the ruler, Baroness Thryla.  Thryla announces that such an important person as Sanna must become betrothed to her son, a rather self-absorbed boy named Pedar.

Sanna is non-plussed.  None of this brings Sanna closer to finding her long lost mother.  She's not particularly interested in Pedar or even in the ways of landish romance.  Pedar does himself no favors, acting arrogantly around her.  And something is a bit off about Thryla.  In fact, the woman is a witch, who gathers souls to help elongate her life.  Sanna, with all of her magic, could be a powerful source.  To exploit her and retain her, Thryla must keep Sanna close by.  In the end, when Thryla and Sanna face off, the outcome surprises everyone.

A flowing and melodic fantasy novel, but plagued by a painfully slow pace that both suffers from repetition and also from skips and jumps that are confusing to follow.  I never got much into it, although I slogged through to the end.  The story eventually does resolve (we find Sanna's mother by the end) it really isn't very interested in telling a story.  Instead, it delights in its words.  There is also an underlying misandry (men portrayed as either rapacious or vain) and anti-religious thread to the entire book which is a bit disturbing.  This is addressed in an afterward from the author as some sort of literary experiment but seemed out of place and pretentious.