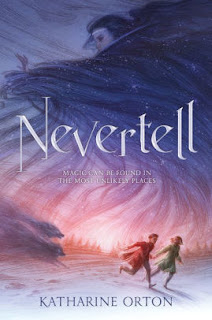 Lina has never known life outside of captivity.  Born inside a Soviet prison camp, she ekes by with her mother and her best friend Bogdan.  The Commandant has a soft spot for her (which many in the camp believe is because he is her father), but life is still very hard.  One night, Lina and Bogdan escape, with instructions to find someway to get to Moscow, where Lina's grandmother will help them.

The world outside of the camp is dangerous.  Not only are they in the middle of frozen Siberian steppe, but the land itself is full of spirits and sorcerers.  Ghost wolves and Baba Yaga herself roam free.  Constantly thrown from one danger to another, Lina and Bogdan navigate through a world that mixes Soviet reality and Russian folk tale in a magical quest.

The amalgam of historical fact and folktale is peculiar, and one that I never got used to.  Despite the inspirations, there was nothing that really felt particularly Russian about this story.  Names, places, and ideas were all there, but the characters were distinctly English.  The story itself is wildly chaotic and hard to really follow.  The bad guys (the Commandant and the witch Svetlana) are strange and inconsistent characters, and their motivations contradictory and obscure.  The goals of the quest are constantly changing.  By mid-point I gave on trying to keep track of why we were going places and doing things.  The plot had more loose ends than a well-worn Central Asian rug!  A colossal mess of a novel.