She Loves You (Yeah Yeah Yeah), by Ann Hood 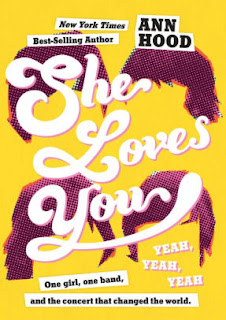 In 1964, Trudy Mixer discovered the Beatles and she founded the first Beatles fan club in Rhode Island at her middle school.  They would sent fan letters, make posters, and whenever a new album came out, the members would pore over it.  Trudy could even get her Dad to join her in listening (Mom preferred Sinatra to four boys who needed haircuts!).  The Beatles and the affection she shared for them with her peers and her father were forever!

But two years later, the numbers in the fan club are dwindling as Trudy's friends drift away to cheerleading, her father has less time for her, and even the Beatles are changing the sound of their music.  With the world changing in both big and small ways, Trudy wants to find some way to bring everything back to the way it was.  When she learns that the Beatles are coming to perform in Boston in August, she realizes that this is what could finally do it!

A sweet period piece that captures lots of atmosphere.  The theme of learning to cope with change is tried and true material of course.  With a focus on what would seem most striking to young readers, we've got everything from the advent of disposable diapers and the first Barbie doll to Betty Friedan and the Vietnam War.  And then there's the Beatles themselves, which form an appropriately formidable place in Trudy's obsessed mind.  The strength of the story of course rests on Trudy who carries the story with a mix of determination and insecurity that make her relatable to middle schoolers.  The book's fantasy ending, which could have seemed overly contrived, works as it provides both payoff and a means for wrapping up a story that is more about friendship and loyalty than the music.