What I Want You To See, by Catherine Linka 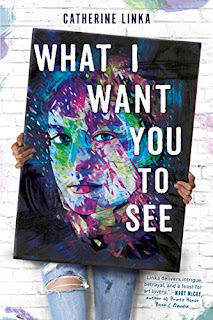 The art scholarship was supposed to be Sabine's ticket out of poverty.  After her mother died, she's ended up on the street.  The scholarship, with a free ride and money to cover living expenses, would carry her through.  And then after art school, there would be a future as long as she worked hard enough.

The reality is that the scholarship solved little. It doesn't really cover her needs and it leaves her vulnerable.  An unsympathetic teacher, cut- throat competition from the other students, and a past that she can't run away from fast enough put her in a precarious place.  Worst of all, Sabine carries a chip on her shoulder.  Resentful that she always has to work so hard and the world is ganging up on her, Sabine makes a tragic error of judgment that snowballs.  As a result of her decision, she finds herself embroiled in a forgery scandal, the untangling of which will finish her career before it even starts.

After everything she has been through, Sabine can't imagine throwing it all away.  Her mother always told her that "the only way out is through." For Sabine, finding the strength to bravely plow on through her mess may be the only way out.

A tense story, combined with a protagonist who makes all the worst decisions (with the best of intentions), creates a novel that engages from start to finish.  You really want to root for this young woman, whose heart is truly in the right place, but her problems seem so insurmountable (and they keep on coming).    Along the way, she travels a truly impressive growth, moving beyond anger and wrath towards acceptance and forgiveness.

Ending a story like this was always going to be challenging, but Linka does a great job of providing a conclusion that, while not particularly rosy, at least offers some hope.  Given what Sabine has to endure, hope might be good enough.  So that, even if she doesn't get what she wanted, she gains understanding and growth that is its own reward.  That journey makes Sabine's hard slog a rewarding read.