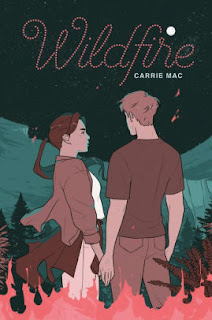 Annie and Pete are that rare set:  the boy and girl who have remained friends from childhood without drifting into romance.  What has allowed that is their code of rules and a shared history.  Bonding over a variety of near-death experiences (mostly as a result of poor choices with dumb luck rescues), they understand each other in a way that no one else does.

Hiking through the woods of the Pacific Northwest (amidst hundreds of wildfires) they make one irresponsible decision too many and find themselves in a situation that can't get out of.  This elicits a stream of recollections of each of their previous close calls, used to tells us the story of how they become so close.  Unfortunately, it also leaves them further and further away from any chance of rescue.

There's a tremendous depth to the characters and I admired Mac's storytelling ability, but these Annie and Pete are a bit hard to take.  Pete in particular behaves really badly, selfishly putting Annie into some impossible situations. Occasional bad choices are the bread and butter of YA.  They create the situations that the protagonists get themselves out of.  But here, they come one after another and the characters seem determined to let them happen.

Self-destruction is not pretty and not terribly inspiring.  Smart kids doing stupid stuff isn't really a story I want to read.