Agnes at the End of the World, by Kelly McWilliams 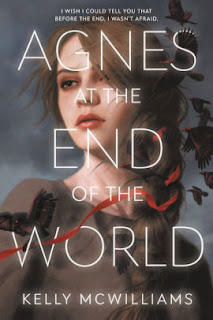 At Red Creek, life is simple and straightforward.  The Prophet speaks for God and rules all.  His Patriarchs administer his will over their plural wives and children.  Technology is evil and the outside world is dangerous and forbidden.  While Agnes has struggled with parts of the doctrine, she has always found great comfort in the structure, routine, and faith of the place  But her younger brother Ezekiel suffers from diabetes and he will die unless she can continue to get him insulin, which she smuggles to him in direct violation of the Prophet's rules that forbid outside medicine.  That window to the outside brings with it a crisis of faith for Agnes when the Prophet announces that End Times are upon them and everyone must take shelter in Red Creek's underground bunker.

Faced with the reality that retreating to the bunker will spell certain death for her brother, Agnes decides to take him and flee to the outside world. There she finds that the Prophet's warnings are not far off the mark.  A global pandemic has shattered civilization.  Millions have fallen victim through a process where their skin turns crimson and hard and they eventually swarm into huge masses of semi-living beings called "nests." Amidst this chaos and disorder, Agnes and Ezekiel try to find a new safer home before realizing that Agnes has a calling and must obey her own prophecy.

This original dystopian novel sounds like so many things but ultimately transcends them all.  Part One, which outlines the oppressive and soul killing world of a religious cult and Agnes's plans to flee it will sound like any number of novels about teenagers in cult compounds.  Part Two takes us into The Stand territory with its peculiar share of Stephen King thrills (much of which resonates strongly in a COVID-19 world).  But by the time we hit Part Three, the story has left those tired genres and moved into Agnes's search for truth.  Like all good prophecy stories, Agnes initially resists her calling (aching to remain mortal and insignificant), feels anger at being placed in a role of such great responsibility, and ultimately understands the sacrifice that she was always going to make.

The author's prediction of pandemic was a lucky strike and gives the book some extra gravitas, but McWilliams has created a keeper without that bit of serendipity.  Her story is ultimately about how faith creates religion or how religion creates faith (and when the two are at cross purposes).  This is sermon-worthy material packed into an exciting action story that will keep you turning pages, leaving behind ideas that will have you thinking for long after you've read the last page.  A stunning, astounding novel that defies the genres it mines.