Beyond the Break, by Heather Buchta 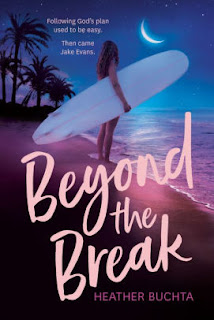 One of the truly rarest themes in YA literature are stories with a strong respectful approach to religion.  In these days of no holds barred children's literature, religion remains the one truly awkward topic.  Holding aside books written specifically for the Christian market, it's hard to find books for teenagers that tackle faith.  So when one comes along, I like to call it out.

When Lovette's older brother was seriously injured (and nearly died) in a surfing accident, her parents flat out prohibited Lovette from being in the ocean, let alone surfing.  That hurt a lot and Lovette couldn't pull herself away.  With her brother's life hanging by a thread and her parents distant and distracted, it was on the waves that she found her comfort.  And when her friend Kelly took her along with her to her church's youth group, she found a similar comfort in Jesus.

For a twelve year-old from a largely non-religious family, Christianity hadn't meant much to her before.  But in the companionship and the Bible, she found a place and a meaning that she needed.  Part of that  was her pledge to remain pure -- not to date until she meets the One and not even to kiss until her wedding day.  And while she's not made a big deal about it, not dating has been a bedrock part of her life, given her focus, an become interwoven with her faith.  At the same time, so has her secret trips to the ocean to swim.

Years later, she becomes reacquainted with a boy named Jake, who reignites her love for the surf and inspires her to confront her parents about their prohibitions.  When she finds she has feelings for him as well, it throws her into a spiritual crisis.  It was so easy to be a good Christian when she was a twelve year-old girl, but does that pledge really still work for her when it stands between her and Jake?  And is questioning that defying Him?  How do you keep faith as you enter adulthood and your world becomes more complicated?

The story features strong and nuanced characters who act authentically and are often surprising.  The story moves effortlessly and has a lot of good surfing scenes for fans of the genre.  The relationships between Lovette and her family, between her and her friends, and the complicated relationship between her and Jake are make for good reading.  But, of course, the primary purpose of the book is the spiritual challenges she faces and that is what makes this compelling reading.

I understand why some people will avoid this book altogether -- the characters' unapologetic love for Christ will trigger some readers.  However, that fidelity to God is key to this story and there is an intrinsic beauty to Lovette's journey as she navigates the ways that her relationship with her parents and with her God are changing that makes this novel worthwhile. The author's background as a youth pastor serves the story well and one imagines that Buchta is pulling on a lot of experiences working through these same issues with a lot of real kids.  That she creates an entertaining novel out of such emotionally authentic feelings is noteworthy.