Lies We Tell Ourselves, by Robin Talley 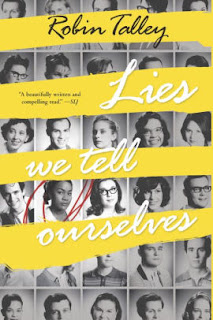 Davidsburg, Virginia in the 1950s was a place where everyone knew their place, white or black, man and woman.  But in 1959, after years of fighting in the courts, the school district is finally forced to integrate its schools.  Sarah is a senior and one of the first black students to attend Jefferson High.  It doesn't go well and in the first part of this novel, we are exposed to the immense cruelty and hatred that these young pioneers faced against the arrogance and ignorance of their peers.  It's a harrowing read and enough to turn your stomach, but well worth enduring for what follows.

In part two, we get introduced to Linda, a white girl and the daughter of the local newspaper's editor.  Like her Daddy, she's a proud opponent of integration.  The attempt of "Communists" and subversives to undermine the way things have always been cannot stand and she'll do everything she can to fight against Sarah and the other black students ruining her school.  She's a true believer in the separation of the races and the inherent superiority of whites over most blacks, but as the story progresses, she comes to question the things she's told herself are true.

All of that by itself would make for a a very powerful book, but Talley has grander ambitions.  The lies these characters tell themselves are not limited to issues of race and privilege alone, the novel also tackles sexism, classism, and even homophobia.  And while it is never said outright, the story makes it clear that not all problems were fixed by the Civil Rights movement.  The end result is a startling piece of historical fiction, brutal and unrelenting in its depiction of violence, cruelty, and indifference, but just as unrelenting in its vision of hope for a (not yet realized) better world.

I might quibble that Talley has bitten off a lot more than she really needed to (simply tackling racial injustice might well have been sufficient?) but there's a compelling logic to her decision to tie the way that all of these forms of arrogance and inequality are related.  And the ability of so many that stand on the sidelines and tacitly endorse the behavior with their silence is part and parcel of the same problem.  The forces that make a daughter subject to her father's physical abuse or the subjugation of an unmarried mother to economic injustice are no less destructive than a school full of racist bullies torturing their classmates and the complicity of the teachers and administrators who allowed it to happen.  For anyone who has been on the receiving end of injustice, this is a painful and uncomfortable read, but thought provoking all the more so for it.