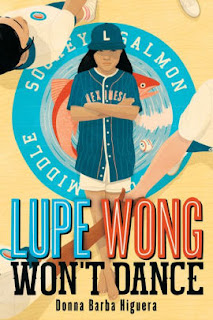 This is no greater hell on Earth than a middle school square dancing unit.

Lupe Wong has a hero:  Fu Li Hernandez, the Chinese Mexican pitcher for the Seattle Mariners.  As a fellow Chinacan/Mexinese, she figures he's got to know her frustration when filling out the race item on forms.  Lupe's uncle is friends with Hernandez and has promised Lupe that he'll arrange for the two of them to meet if Lupe can get straight As this year.  It should be easy.  She's doing well in all of her classes.  But then she discovers that they are going to have to learn to dance in phys ed and suddenly Lupe isn't sure she can do it!

Lupe is a problem solver, so she turns her energy towards finding a way to get the curriculum changed.  She tries to convince the adults that square dancing is harmful (no luck!).  Then she uncovers that the words to the "Cotton Eye Joe" song they are dancing to are suspect (the school changes the dance music). She starts a change.org petition to protest the fact that boys choose the partners (the school pledges to change the policy next time). And so on.  But in the end, the real solution is for her to find a way to just dance in her own way.

In general, this was a pretty amusing book.  Lupe is creative and persistent.  While she exploits the Culture Wars for her own selfish gain, she's astute and in the long run comes to see the bigger picture here (the author's long-term solution to Lupe's complaints is certainly discussion worthy and will give readers food for thought).  Ultimately, the story is a winner because it focuses on how thinking about others and their needs will make you a winner.  For as much as Lupe wants to meet her hero, she proves that she is willing to put that dream on the line to do the right thing.  That is ultimately a pretty heroic thing to do.